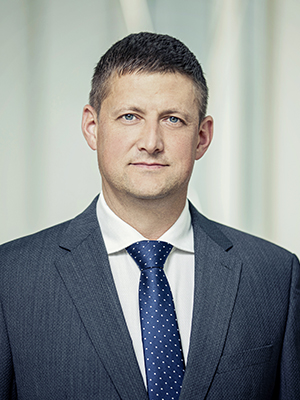 Ansis Zeltins is the Chief Executive Officer of the Freeport of Riga since 2017. Previously, he was the Chairman of the Council of the SJSC “Latvijas dzelzcels” and Member of the Board of “Rigas Brivostas flote” Ltd.

Additionally, he has gained diplomatic experience in the Permanent Representation of the Republic of Latvia to the European Union in Brussels, working as a Transport Adviser. Prior to that, he was the Chairman of the Board of the subsidiary company “LSC Shipmanagement” Ltd. of JSC “Latvijas kugnieciba” and managed the JSC “Latvijas Juras administracija” (Maritime Administration of Latvia) for more than 9 years.

Ansis holds a Bachelor's degree from Latvian Maritime Academy in Maritime Transport and a Master's degree in Business Administration from University of Salford (United Kingdom).

Ansis has the qualification of a chief mate on ships of 3000 BT and above.