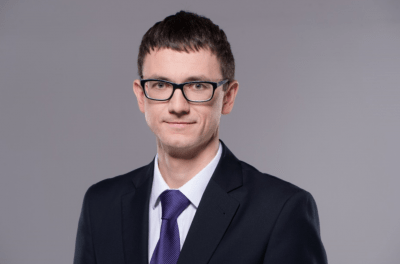 On December 7th 2018 he was appointed Government Plenipotentiary for Cybersecurity. He is also Vice-Chairman of the Digital Committee of the Council of Ministers and Chairman of the IT Architecture Council.

Okonski is an experienced project and programme manager, who held managerial positions in advisory services, banking, postal services and public administration. In 2001-2012, he was involved in numerous IT projects on behalf of Accenture Sp. z o.o., an international consulting firm, and then served as IT director at Poczta Polska Usługi Cyfrowe and FM Bank PBP.

He’s a holder of PMP, Prince 2 Practitioner and ITIL certificates. Graduate of numerous training courses regarding IT project implementation and IT management. He specialises in complex integration projects as well as change management and software development cycle processes. He is fluent in English, German and Spanish.

Outside of work, he is passionate about Ibero-American literature, watchmaking, photography and sport.