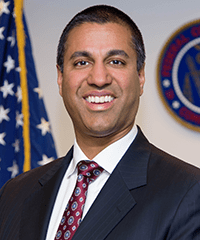 Ajit Pai is the Chairman of the Federal Communications Commission. He was designated Chairman by President Donald Trump in January 2017. He had previously served as Commissioner at the FCC, appointed by then-President Barack Obama and confirmed unanimously by the U.S. Senate in May 2012.

Earlier in his career, he served in various positions of increasing responsibility at the FCC, the US Department of Justice, and the US Senate. Before becoming a Commissioner, Ajit worked as a Partner at the law firm of Jenner & Block and served as in-house counsel at a telecommunications company.

Since taking the helm at the FCC, Chairman Pai has championed regulatory modernisation, updating rules to match marketplace realities and aiming to deliver consumer value through market-based solutions instead of pre-emptive regulation. He also has made the FCC more transparent, nimble, and accessible.